Posted by Gabriel Fernandes for Brilliant Puzzles on 10/21/2014 to Featured Puzzles and Brain Teasers
I've been a blogger for over four years now, and one of the perks of this hobby is that a lot of people write to me on a regular basis, whether it's to exchange ideas, commenting about a particular post, or simply to ask questions about these wonderful objects we like to call...mechanical puzzles. One of the questions I was asked a while back got me thinking about puzzles in a different way, looking for characteristics and special features that distinguish them from the average-looking puzzles.

"Which company/craftsman makes the most beautiful puzzles?"

The question couldn't be simpler, but the answer, however, is very subjective and will vary greatly on the person who answers you. Nevertheless, the query didn't deter me from trying to come up with a good response - After all, I love to discuss all things puzzle. Mind you, the topic is about the most beautiful puzzles, not the best - Although some puzzles can belong to both categories.

Since there's no definite answer for this question, and the exercise would be a moot point if I were to stick with one single entity, I will try to enumerate several unique key points inherent to that subject in a series of articles (each focusing on a different company or craftsman) and let you, the reader, decide for yourself.

So, what better way to start this series of articles than with one of the most recognizable puzzle brands in the world, the Cast Puzzles from the Japanese company Hanayama? If you ever visited a puzzle store (online or a physical shop), chances are you've probably seen a few of these Cast Puzzles, also because they're usually the featured brand.

Believe it or not, Hanayama is not just Cast Puzzles, although that's what gets them the most recognition within the puzzle community. But why are Cast Puzzles so popular and so high in demand? What makes them so appealing and fascinating, or put simply, so beautiful? One short answer would be that they're not just puzzles...they're works of art. They're an expression, a product of their designer's creativity, genius and inventiveness. At first sight, some of them don't even look like a puzzle at all.

Each Cast Puzzle is carefully chosen after much consideration and only the most talented designers can aspire of having their designs picked up for that coveted metal-cast version. Most of the puzzles that Hanayama adds to their ever-growing catalog are presented in the annual IPP (International Puzzle Party) by their own designers, but not necessarily in metal, because in many cases they're yet to be acquired by the Japanese company. Frequently, although not surprisingly, a lot of these designs end up winning awards, which adds up to their prestigious reputation among the puzzle community.

The story of the Cast Puzzle series began in 1983, with the launch of the first three puzzles: ABC, Star and Key (Photo 1) 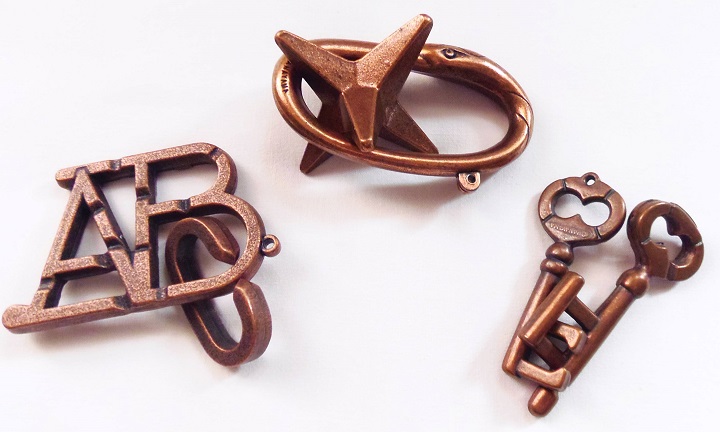 Curiously enough, it's the year I was born, so perhaps that's why I like them so much. Since then, Hanayama has been releasing an average of 2 puzzles a year and now totals over 60 different designs.

Now, any good article that talks about Hanayama and doesn't mention Nobuyuki Yoshigahara (a.k.a Nob) is not complete or, at best, inaccurate. Nob is the father of the Cast Puzzle series, developing new designs and improving existing ones when they didn't met the company's criteria (the three puzzles above were developed by him). Over the years and up until his passing, in 2004, he was responsible for bringing many other designs to the Cast Puzzle family. He also influenced lots of other designers to share their ideas and concepts, thus enriching the company's catalog, like Oskar van Deventer, Akio Yamamoto, or Vesa Timonen, who are among the top design contributors.

The name Cast Puzzle derives from the actual process used to manufacture each and every single puzzle, and considering they're made from cast metal using only different combinations of alloys and coatings, the variety of colors and surface types is rather impressive, to say the least. A typical Cast Puzzle is usually quite small - smaller than a regular Rubik's Cube - and fits comfortably on the palm of your hand. There are exceptions, though, and two examples are the Cast L'œuf and the Cast Bike (Photo 2). Since it's made entirely out of solid metal - no hollow parts - its weight feels often times surprisingly heavy.

A regular Cast Puzzle doesn't follow any specific design rules. Some are beautiful and exquisite representations of already known objects or animals, like the Cast Seahorse or the Cast Violon (Photo 3); others are completely abstract, like the Cast Baroq or the Cast Radix
(Photo 3).
Hanayama simply doesn't overlook any detail and 99% of the puzzles don't show any kind of imperfections. There seems to be a common rule among all Cast Puzzles, however. A requisite, if you will: their solution is never straightforward, but always ambiguous, cryptic and vague.

The goal of any Cast Puzzle is elementary: take apart and put back together again. It doesn't get any simpler than this...And yet, some puzzles are extremely difficult to disassemble and even harder to reassemble, but giving you, in the process, a great sense of accomplishment. To make matters worse, Hanayama doesn't include a solution with their puzzles. You're on your own to try and figure out how to solve them. Each one has its own theme, its own personality, as if they were telling you a story of how they came to be and how you should approach them. Fewer words can often say more, and in this case it couldn't be truer. One word is exactly what you get from Hanayama to solve their puzzles.

The Cast series have been increasing in popularity over the years, but not just among puzzle fans. Non-puzzlers also seem intrigued and tempted by these enigmatic objects, mostly because a Cast Puzzle is a type of brainteaser that promotes discovery and exploration, a careful analysis of all its parts, and those virtues are innate to any curious-minded person. They can have the ability - probably more than any type of puzzle - to get anyone addicted to them. They're the perfect object to get everyone involved and engaged in any social gathering with family and friends.

You'd think that all these premium features are exclusive to a very expensive type of puzzles, but that's actually another explanation for why Hanayama's Cast range is so popular - They're the best and most beautiful puzzles that $12 can buy.
Buy all the Hanayama collection or some at Brilliant Puzzles.

It is said that beauty is in the eye of the beholder, and therefore subjective to one's taste...Be that as it may, for over 30 years now, millions of beholders seem to agree with one thing: Cast Puzzles are fascinating, charming and eye-catchingly beautiful masterpieces that need to be experienced in order to be fully appreciated and enjoyed. It would be an almost impossible task to choose just one Cast Puzzle, so I have gathered below 10 of my favorite ones (Photo 4). 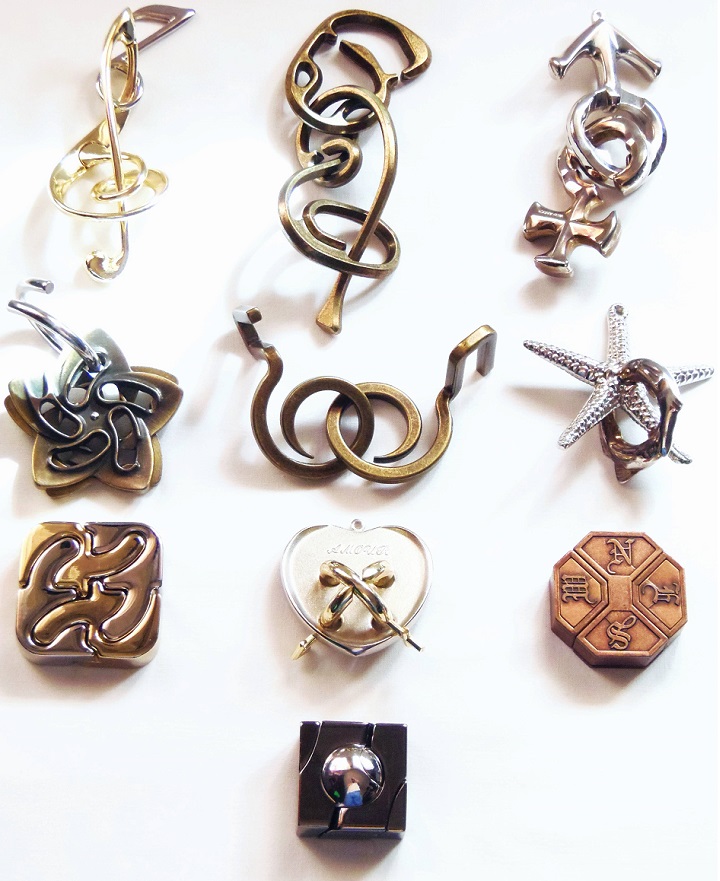